Man with a Movie Camera

"The Man with a Movie Camera" was directed by Denis Kaufman, who took the name Dziga Vertof, which means spinning top, a nom de film which is entirely appropriate in this movie. The movie was edited by Vertof's wife, Yelizaveta Svilova, and for the most part the man with the camera was Vertof's brother Mikhail Kaufman.

"The Man with a Movie Camera" is the "Koyaanisqatsi" of 1929, and certain of the music reminds me of Philip Glasses music in that film. (Other times the music reminds me of Edvard Grieg.) The movie starts with the beginning of a day in several Soviet cities, including Odessa, and progresses to the end of a day. However, the unimaginably swift cuts and editing make it a swirling montage of work, play, sports, and rest. Vertof, Svilova, and Kaufman take us on the whirlwind of Oz, and we realize we're not in Odessa anymore.

I don't know whom to credit, so I'll refer to the trio. They took serious risks in putting the camera in places it wasn't meant to go. They show us Kaufman on the side of a train at full speed, standing on the doors of a convertible speeding down the street, on a motorcycle in a race as he steers the motorcycle and hand cranks the camera, climbing a tall chimney, and much, much more. We see him in a firetruck filming an ambulance, then we see the ambulance from his point of view, and it cuts back and forth showing him filming, showing what he's filming. We see the theater where this film is being shown, watch it being projected on the screen, watch the audience watching the film, watch it with them.

We see many scenes of Svilova in the process of editing the movie, with some scenes ending in a freeze frame then pulling back to see her hand on the film as she cuts and splices it. Several scenes show her selecting scenes to insert into the film, then we see the scenes.

The trio used jump cuts, some as short as one frame, double exposures, freeze frames, extreme close ups, extreme long lens shots, tracking shots, stop-motion animation, split screens, and much more. The movie was an incredible work of considerable brilliance by the trio, all the more impressive for being produced in 1929.

It's a short movie of about an hour, and I recommend watching it with the music, then turning on the commentary and listening to Tsivian describe the film for the ultimate metajuxtaposition. Dr. Tsivian is a professor at the University of Chicago. 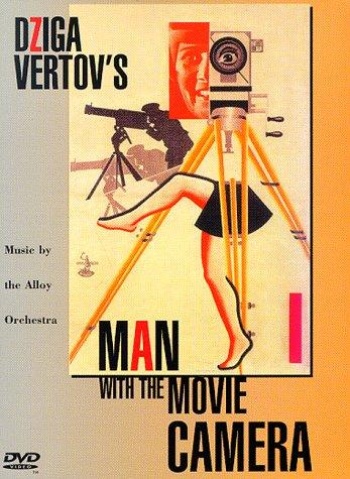