Troubled by a strange recurring dream and mourning the loss of her beloved father, nineteen-year-old Alice Kingsleigh attends a garden party at Lord Ascot's estate, where she is confronted by an unwanted marriage proposal and the stifling expectations of the society in which she lives. Unsure of how to reply, and increasingly confused, she runs away to chase after a rabbit in a blue waistcoat, and accidentally falls into a large rabbit hole. She is transported to a world called Wonderland, where she is greeted by the White Rabbit, the Dormouse, the Dodo, and Tweedledum and Tweedledee. They argue over her identity as "the right Alice", who it is foretold will slay the Red Queen's Jabberwocky on the Frabjous Day and restore the White Queen to power. The group is then ambushed by the Bandersnatch and a group of playing-card soldiers led by the Knave of Hearts. Alice escapes and flees into the woods. 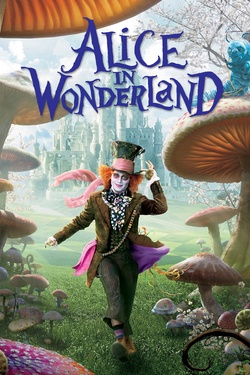