In 1916 Tsar Nicholas II hosts a ball at the Catherine Palace to celebrate the Romanov tricentennial. His mother, the Dowager Empress Marie Feodorovna (Angela Lansbury), is visiting from Paris, and gives a music box and a necklace inscribed with the words “Together in Paris” as parting gifts to her eight-year-old granddaughter, Grand Duchess Anastasia (Kirsten Dunst). The ball is suddenly interrupted by Grigori Rasputin (Christopher Lloyd), a sorcerer who was banished by the Tsar for treason. Rasputin had then sold his soul in exchange for an unholy reliquary, which he uses to cast a curse on the Romanov family in revenge, sparking a revolution that forces them to flee the palace. Only Marie and Anastasia are able to escape, thanks to a young servant boy named Dimitri, who shows them a secret passageway in Anastasia's room. Rasputin confronts the two royals outside, only to fall through the ice and drown. The pair manage to reach a moving train, but only Marie climbs aboard while Anastasia falls, hitting her head on the platform. 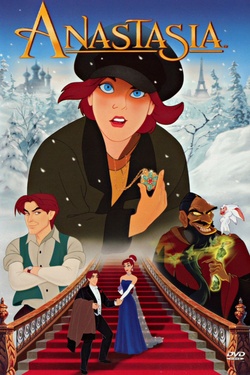