Astronauts training in an Apollo simulator have their session ended early. They grumble about it later, but their leader, Chiz (Duvall), knows why. The Pilgrim Program. The Russians will be sending a moon landing mission up in four weeks. The Americans had a secret alternate plan to the Apollo program (Pilgrim) in case this happened. One man would be sent to the moon in a one-way rocket. He would stay on the moon for a few months in a shelter pod launched and landed before him. Later, a manned Apollo mission would come to retrieve him. The equipment is all ready, but the Russians complicated matters by sending up a civilian. Even though Chiz is trained and qualified, he's an Air Force colonel. NASA and the White House insist that an American civilian be their first man. Lee, one of Chiz's crew, is tapped. Chiz is outraged, but agrees to train Lee in the few days they have. Chiz pushes Lee's training hard, half to get him ready, half hoping he'll drop out and Chiz can step in. Lee persists, driven by the same astronaut dream. After a press leak about Pilgrim, the Russians launch a week early. Deflated at not being first, everyone carries on. The shelter pod (a LEM lander) is launched and landed successfully. Lee is launched on schedule. He encounters a power drain malfunction en route which tests his character and hinders radio contact. The Russians have lost contact with their team too. As Lee orbits the moon, he does not see the beacon of the shelter. With only seconds left before he must abort and return to earth he lies about seeing it. Mission control okays his retro burn and he lands. Now all radio contact is lost. Lee gets out of the Gemini lander and walks around. He has just three hours of oxygen in his suit. He finds the crashed Russian lander on its side. The three dead cosmonauts are sprawled around. Everyone on earth is nervously awaiting some news, but get none. Lee takes the Soviet flag from a dead cosmonaut and lays it out on a nearby rock with his own American flag. With little air left and nowhere to go, Lee spins the toy mouse his son gave him. It points stage-right, so he walks that direction. People on earth are losing hope as his time has run out. Lee looks at his watch to see that he has just minutes of air left. A red glow on his arm catches his attention. It is the locator beacon atop the shelter. Lee is last seen walking towards the shelter as the movie closes. 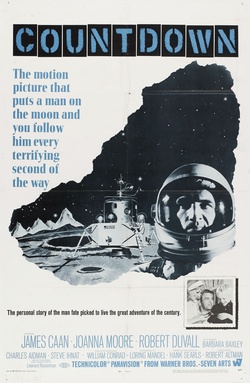