Directed by Roger Vadim as a modern (1959) adaptation of the once scandalous French novel, it pits one woman's desire to manipulate others against the power of real love. Jeanne Moreau plays Juliette de Merteuil, a conniving socialite who manipulates the Vicomte de Valmont (played by Gérard Philipe) into meeting and seducing Marianne (Annette Vadim). Valmont and Marianne fall in love much to his dismay and to the delight of Merteuil. Shot in black and white in the style of the French New Wave (Nouvelle Vague) Vadim's whirlwind portrayal of Merteuil and Valmont's deceitful dealings brings together a clash of late 1950s society and 18th-century morality. 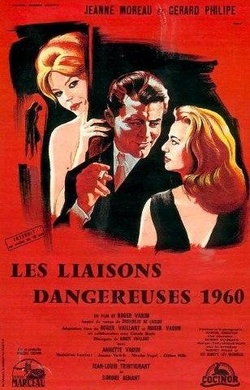