Samson, a Hebrew placed under Nazirite vows from birth by his mother, is engaged to a Philistine woman named Semadar. At their engagement, Samson loses a bet with his wedding guests (owing by a large part to Semadar) and attacks thirty Philistines to strip them of their cloaks to pay his betting debt. When his deeds become known, Semadar is killed during their wedding feast; Samson becomes a hunted man and in his fury he begins fighting the Philistines. The Saran of Gaza (Sanders) imposes heavy taxes on the Dannites, with the purpose of having Samson betrayed by his own people. Saran's plan works, and frustrated Dannites hand over Samson to the Philistines, much to the joy of Delilah, Semadar's sister. Samson is taken by the high general Ahtur (Wilcoxon) and a regiment of Philistine troops. En route back to Gaza, Ahtur decides to taunt Samson. Samson rips apart his chains and ropes and begins to combat the Philistines, toppling Ahtur's war chariot and using the jawbone of an ass to club the Philistine soldiers to death. 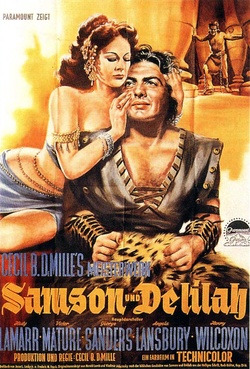