At a factory the group are investigating the Luna Ghost in a typical case. Daphne (Sarah Michelle Gellar) has been captured, bound with jump rope and gagged with her own scarf. The gang trap goes wrong, but despite this the ghost is captured. The ghost is revealed to be a creepy janitor. After solving the case of the Luna Ghost, the members of Mystery Inc. argue over Fred's taking credit for Velma's plan, Daphne being told she always gets captured, and the group disband. After 2 years, Fred (Freddie Prinze, Jr.) who was the group's leader, becomes a celebrity, Daphne, who was the team's damsel in distress is now a martial arts expert, and Velma (Linda Cardellini), the team's genius is now a NASA employee, while Shaggy (Matthew Lillard) and Scooby (Neil Fanning) the group's dimwitted, but heroic backup have now become beach bums. 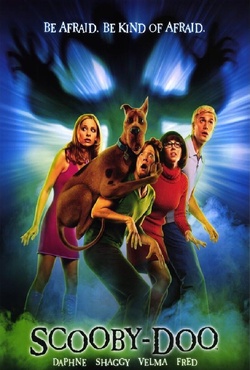