Bel Ami is better than the critics say it is

American reviewers have been brutal in their condemnation of this new filmed Bel Ami (it's been made into movies before) and especially of Robert Pattinson's performance as Georges Du Roy, the young arrriviste-seducer protagonist of Guy de Maupassant's 1885 novel set in Paris. It seems they have it in for Pattinson for starring in the kitsch, wildly successful "Twilight" vampire series. But Pattinson's fine; he's even rather interesting, except that he perhaps smiles a little too much. He has a riveting, mobile face, beautiful, sensual and (when he's not smiling) sad. When Pattinson's Du Roy gets out of his garret and can buy some nice clothes he's so elegant in his Edwardian suits and neckties you can easily imagine women would line up to have affairs with him. He has screen presence. It feels as though his highly pressured character is changing from minute to minute here, and if he seems shallow at times, that's exactly how the character is described in the book and by some of the characters: a void.

The real problem is not with Pattinson at all. And certainly not with the beautiful costumes and sets or the feel of the period, with its tacky whores, wild dance halls; its newspaper offices, its fashionable salons. Nor is it with the actresses who play the women in Du Roy's life, Uma Thurman, Kristin Scott Thomas and Christina Ricci, though they are somewhat oddly used. Thurman seems to be channeling the husky voice of the Fifties British great Joan Greenwood. Scott Thomas goes against type in being simpering and smitten, and Ricci lacks her usual poise and irony. But that's okay. The problem is more with the patchy screenplay, whose underwritten, elliptical scenes constantly allude to the politics, economics, and journalism of the book but never manage to make them really clear. The scenes of sexual adventure wind up seeming patchy too. They work well enough individually, but they convey too little sense of Du Roy's schemes and manipulations. His life just seems a series of improvisations. It's not altogether clear how he really fits into the events happening around him. Where does his money come from? What is his actual status, and how does it progress? These little details, so essential to the real arriviste, are too rarely spelled out.

In the book, Du Roy is a railroad employee who can barely make ends meet, and then through a fellow cavalry officer gets a newspaper job. But the job doesn't mean so much, at first anyway (and the film does make that much clear). The main thing is that he starts to meet fashionable women, he is instantly attractive to them, and by exploiting this attraction he rises to the summit of Paris society, moving through a nexus of capitalism, politics, and movers and shakers of the press whose machinations are depicted through a story of colonialism focused on Algeria and Morocco. Deprived of direct power by the Code Napoléon, the women act indirectly as teachers (or "trainers") manipulating their men, partly using Du Roy to do so.

Maybe if the skillful Christopher Hampton, who penned Frears' excellent 1988 English language Dangerous Liaisons, had written this screen adaptation, we'd have understood why people compare Du Roy to the Vicomte de Valmont in De Laclos' novel. But as Du Roy's written and Pattinson plays him, he never acquires that degree of calculation and cynicism. Maybe Pattinson plays him too nice; but in this context, his interpretation works. Du Roy is fundamentally unlike Valmont in beginning from a position of poverty and desperation. He oscillates from depression and insecurity to joy at his luck. He enjoys the three women but he is partly their victim, particularly that of Madame Forestier (Thurman), whose newspaper editor husband helps him when he's penniless, then turns against him, then dies, whereupon Du Roy marries her. She does what she likes, and is far cleverer than he.

Juggling all this together in a coherent manner in relation to the seductions and accomplishments of Du Roy seems to have been a bit too much for Donnellan and Ormerod, directing their first feature film. Their adapter, the British TV writer Rachel Bennette, has roughed out a succession of vivid scenes without the right interconnections or a very strong sense of progression. Perhaps she could have done it better in the looser format a TV series. Bel Ami is an enjoyable, but inconclusive watch. 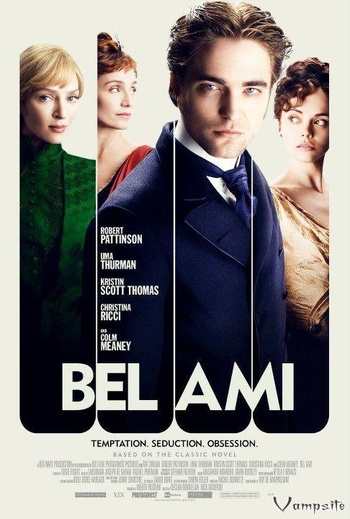