Matteo Garrone's new movie Reality is not as somber or realistic as his 2008 Grand Prize winner at Cannes, Gomorrah, about the Neapolitan crime network, or as creepy as his earlier work. It depicts the pathetic modern confusion of fame with mere notoriety and the universal longing of the poor for sudden wealth. This bright-colored study of a Neapolitan fishmonger everyman hopelessly obsessed with getting on the Italian version of the TV reality show "Big Brother" is one-note and predictable. But through good staging, lively acting and memorably queer moments it acquires at times an epically grotesque feel. In doing so if without the same originality it does draw deeply right from the first frames on some of the greatest Italian cinematic traditions -- Fellini and De Sica -- with its kitsch carnival wedding, its fat ladies, its noisy (fat) Neapolitan family gathering around the goofy dad dreaming the impossible dream. One of the most famous Italian songs of the Fifties was "Addio, sogni di gloria," "Farewell, dreams of glory," and that corny heart-tugging theme gets a rueful update here. Garrone and his co-writers Ugo Chiti, Maurizio Braucci and Massimo Gaudioso are bold in the way their make their protagonist's TV-fame obsession seem increasingly interchangeable with religious fervor.

The dreamer/fishmonger is Luciano (Aniello Arena), and it's his kids who push him to try for a "provino," a screen test, to be on the "Grande Fratello" show. Arena delivers a committed performance from his character's first appearance at that wedding trying to entertain the guests in drag and a purple fright wig. A compulsive showoff, he's not funny, but he gets the reluctant attention of Enzo (Raffaele Ferrante), a former Big Brother contestant who's essentially a talentless non-entity but arrives and leaves the wedding in a helicopter, like a celebrity. If Enzo can do it, why can't Luciano?

Garrone knows how to take a theme and run with it, hard, and by now he's learned a lot about using locations and non-actors skillfully. He gets an intense, borderline pathetic performance from Arena, and his opening Felliniesque swoop in and closing Felliniescque swoop out, accompanied by Alexandre Desplat's restrained but sweeping music, show he's still got a toe-hold on cinematic world class status. This is a study of broken dreams and worn-out ideas, quintessential Italian concerns. Reality is an expression of Italian cinematic tradition -- but a tradition in a debased, simplified form, in the grips of a mind-numbing Berlusconi style TV takeover. How did this country whose cultural history is arguably the world's richest, become so deeply wedded to trash?

The movie has neat visual touches. Luciano and his family live in a big ruined palazzo with many other families in Naples. It seems like a squat. For some reason their apartment appears spacious, bright, filled with nice things. One reason is that Luciano and his fishmonger partner Michele (played by Neapolitan comic Nando Paone) run a "robot" scam with old ladies, which I cannot explain to you, but which nets them extra cash. The funky, warm ruined grandeur of Luciano's Naples housing contrasts with the fake, coldly modern "Casa" of the Grande Fratello set -- spied on all the time by cameras. Why would Luciano want to trade the humanity of his Portici neighborhood and jolly family for a gabble of sleazy swingers -- but then, why wouldn't he, if he has no sense?

Once Luciano has had what seemed a very successful tryout for the show at Cinecittà in Rome, he begins to worry that he, in his own world, is being watched. A mean gesture toward a homeless person whom he drives away from his fish stand fills him afterward with terror and guilt. Was this a test? Luciano begins giving away his possessions in order to make a good impression, convinced all the freeloaders in the neighborhood are spies from the show. And this paranoia is what strangely morphs into something like religious fervor. His growing insanity alienates him from his long-suffering wife Maria (Loredana Simioli).

There's a strong sense of local culture and neighborhood support in Reality -- in contrast to the false bonds among the pseudo-glamorous contestants on the Grande Fratello show. Luciano sells fish in a little market square where everybody knows each other. He's especially encouraged by the young cafe bartender, played by the excellent Ciro Petrone, one of the pair of teenage would-be gangsters in Gomorrah. But this encouragement backfires when Luciano's reality show obsession makes him lose his grip on everyday reality. It seems only religion, and a church program to help the poor his former partner draws him into, can save Luciano -- the old religion, not the new one of fame and money and the airwaves. Only Luciano leaps from a saint's day celebration deeper into his fantasy. As Luciano sneaks onto the Grande Fratello set, he slips completely into madness, and Garrone achieves a genuinely creepy, yet compared to his early work, very mainstream moment.

Reality debuted at Cannes; with it Garrone again won the Grand Prize. It opened in Italy in September, France in October 2012. US releases in NYC March 15, LA, March 22. UK release also March 22, 2013. 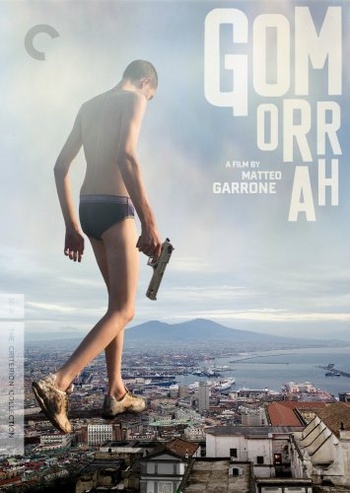