Mike D'Angelo, who saw Wes Anderson's new movie at Cannes, where it opened the festival, called it "easily the most Rushmore-y film he's made since," and gave it a 75, or "excellent" rating in his harsh system, putting it at the top of his top-ten list for the year. Peter Debruge of Variety is more reserved, perhaps eying the challenge to mainstream audiences, but notes that this is a high accomplishment. "While Anderson is essentially a miniaturist, making dollhouse movies about meticulously appareled characters in perfectly appointed environments," Debruge says, "each successive film finds him working on a more ambitious scale" and this one "feels even more finely detailed than any of his previous live-action outings." And yet, and yet, there is a wonderful balance, which Debruge also notes: "Still, the love story reads loud and clear, charming those not put off by all the production's potentially distracting ornamentation."

For me, watching the film in a vicarious Cannes opening night public showing in Paris, where it got applause at the end and people stopped in their tracks to watch the closing credits and applaud again, as for a concert encore, the elaboration was self-conscious, but also both dazzling and enjoyable from the first frames, and the invention and orchestration were continually jaw-dropping. "This is going to be a classic," I kept saying to myself. Moonrise Kingdom is wonderful fun, a genius film. The script co-authored with Roman Coppola is rich and satisfying. If Debruge is right, the whole story and its setting constitute a "poignant metaphor for adolescence itself," of the isolation of childhood and first love, and this film, regardless of the decidedly sui generis oddity of Anderson's style, tells "a universally appealing tale of teenage romance."

The premise stated on IMDb is simple enough: "A pair of young lovers flee their New England town, which causes a local search party to fan out and find them." Let's add that the time is 1965, the town is on an island, the boy at a scout camp led by the foolish but earnest Scout Master Ward (Edward Norton). The island's history, geography, and notable meteorological events (a huge electric storm comes at a climactic point) are periodically noted for us by Bob Balaban, the absurdly costumed presiding narrator. This is a consciously constructed self-sufficient world. Let's note also that the young lovers are only twelve (the girl) and eleven (the boy). And both independent misfits.

Suzy (Kara Hayward) lives with her three little brothers and her parents, Walt and Laura Bishop (Bill Murray and Frances McDormand) in a house attached to a lighthouse on this island of New Penzance (maps of adjoining islands are repeatedly shown). A series of sliding pans explores Suzy's house at the opening as a record is played giving a lesson on the orchestra. The whole thing is a lesson in orchestration, and Anderson (or Balaban) is the orchestra leader, unseen. Meanwhile there are the Khaki Scout Campers, in their rows of little tents elsewhere on the island. Scout Master Ward finds one boy missing ("Jiminy Cricket, he's flown the coop!"). It's Sam (Jared Gilman), a bespectacled, methodical outcast. Most of the other scouts don't like him, and he turns out to be an orphan, whom, when they learn of his running away, his foster parents refuse to accept back.

Sam has discovered Suzy the year before (as explained in an orderly flashback) where she played a blackbird in a (droll and elaborate) play, they've been pen pals, and their runaway idyll was carefully planned. Each comes complexly prepared, he with scout camping equipment -- and he is a master of Khaki Campers' methods Master Ward has taught, she less practically with a valise containing hardcover children's library books and a battery-powered record player with discs including a French pop song, and a pet kitten in a basket with canned cat food. She has forgotten to bring a comb, but says she will just use her hands.

To find the runaways, the scouts team up with the island cops headed by Captain Sharp (a bespectacled and bewigged Bruce Willis); he has been having an affair with Laura Bishop, whose marriage to fellow lawyer Walt is tired and miserable. (Adult relationships are otherwise sketchy.) The search becomes more and more elaborate -- and at some points violent, when Suzy and Sam fight off their pursuers -- as the storm comes on more and more. Eventually a Social Services lady of severe mien arrives (Tilda Swinton) and a higher level scoutmaster is involved, the stern Khaki überfüher, Commander Pierce (an elderly looking Harvey Keitel)

The direction of the movie is toward indulgence and bending of rules, revival, acceptance, and hope -- he classic goals and outcomes of comedy. Sam and Suzy are symbolically married, Sam survives a violent meteorological event and is saved from Tilda Swinton's clutches and adopted by Captain Sharp. Scout enemies become scout friends. Walt and Laura become reconciled to each other. Much is destroyed by the storm (the most challenging feat of staging in the film, involving Anderson's first notable use of CGI), but the next year's crops are the richest and best in memory.

Anderson's use of 16mm makes for a washed out look at times, but it fits with the Sixties timeframe. This isn't his most handsome film, but it's his most beautifully and clearly coordinated one, and as Debruge makes clear, the filmmaker achieves the remarkable feat of making his most elaborate work also his most intimate and touching. The dialogues and exchanges of kisses of Sam and Suzy are not only cute and sweet, but unlike any other such scenes. Though many viewers may find this not their thing (when is that not true?), it's a brilliant film, a triumph of individual (and yet quintessentially American) vision, and surely, as D'Angelo says, one of the best of the year. It did not rock me to the core, but it awed, delighted, and touched me.

Moonrise Kingdom debuted at Cannes May 16, 2012 as the festive opening night film. It was screened for this review the same night at UGC Odéon, Paris. It has received a high Allociné press rating, 3.9; however The Avengers receieived 4.1 and Audiard's Rust and Bone (which has also opened in Paris) received a 4.8 (higher than his Cannes and César-winning previous film A Prophet, which has a 4.6).

The film begins UK and limited US release (US distributor Focus Features) on May 25, 2012. 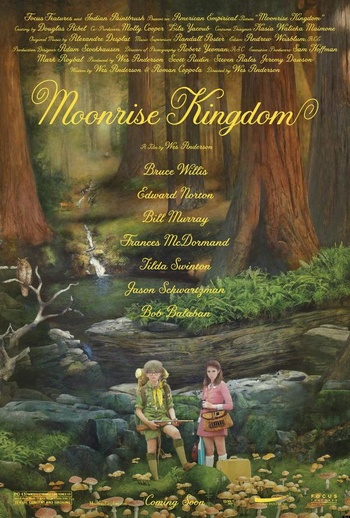