Tarantino's World War II feature Inglourious Basterds shows the director's best and worst features, but in a wholly new setting. Here is his propensity for sectioned films (there are five "chapters") with disparate plots with neat but wildly implausible interconnections. His love of elaborate extended set pieces where the dialogue takes over, sometimes at excruciating length. His playful, ingenious, and sometimes career-rehabilitating casting, which provides actors with irresistible opportunities to memorably strut their stuff. His mastery of old-fashioned camera-work, with bold and traditional uses of big close-ups. Jumping at the challenge of his subject, he tries out some pretty fancy production pieces, notably gun battles and a classic old movie theater rigged up for a Nazi gala, and these are never less than colorful and delightful eye candy. And also his indifference to reality or good taste and his moral blindness.

The new twist is the swing to Europe -- German-occupied France -- with tons of subtitled French and German dialogue, and even translating back and forth between them. A big question is this: can we really stomach a partly comic, partly grandiose, partly grind-house version of the war that is the most tragic event in modern European history? Can World War II be the basis for a movie about movies so fanciful that it seeks to resolve the war in that old Paris cinema with a host of Nazi bigwigs all on hand for a propaganda film? Besides the unbearably, cartoonishly brutal Dirty Dozen team of American Jews headed up by Brad Pitt's southern redneck and charged, as viewers of the movie trailer will well remember, to bring back "Nazi scalps" (a hundred each, in fact) -- something a little in the vein of Samuel Fuller's 1980 saga Big Red One, once planned in this long-contemplated project as a 16-episode TV series -- there's a not-so-secondary dual theme of concealment and identity. And the "Inglourious Basternds" story gets sidelined by the cinema story. But Tarantino has never been linear. And good taste or a firm hold on reality have not been his long suits. This is, no matter what, some splendid filmmaking, and however much it offends or annoys or tortures you to watch, it's a work of unquestionable proficiency, a reveling in the art of moviemaking.

Events begin without ceremony or prelude at a French dairy farm with a visit from the movie's most impressive and despicable character, Col. Hans Landa (played with relish and equal linguistic skill in French, English and German by Austrian-born actor Christoph Waltz), whose nickname is "the Jew Hunter." The farmer, Perrier LaPadite (Denis Menochet) is hiding Jews, and Landa finds them -- but it all happens in dialogue, followed by a violent rain of bullets. One of the hidden family escapes alive, Shoshanna Dreyfus (a touching Mélanie Laurent), who reappears improbably several years later as the proprietor by inheritance of a Paris cinema, having taken on a French Christian name.

This dairy farm sequence is excruciating enough, but less so than the central set piece, a long and nerve-wracking scene in which an English OSS officer's posing as a Nazi officer, Lt. Archie Hicox (Michael Fassbender), is gradually smoked out in a cellar bar. At a certain point in this sequence the excruciating becomes hard to separate from the tedious -- till all hell breaks loose. Central here is the German actress Bridget von Hammersmark (Diana Kruger), undercover for the Allies, who's caught out later like a doomed Cinderella, by a shoe that fits.

Meanwhile there are brutal scenes of the "basterds" bashing Nazis, Jews belying the stereotypically "meek" Jewish identity by becoming comic book superheroes, foremost among them Sgt. Donny Donowitz (Eli Roth of Hostel and Deathproof), "the Bear Jew," who kills Nazis by smashing in their skulls with a baseball bat, preferably in front of their comrades. And there are several Germans who pose as Nazis while their real aim is to kill them. And there is young German war hero Fredrick Zoller ( Daniel Brühl), fluent in French, and in love with Shoshanna as well as with movies -- and he becomes a movie star, like a German Audie Murphy, beginning by playing himself in a propaganda film, but becomes increasingly detached from the image he's identified with and finally unable to bear watching the reenactments his own famous deeds. The ingenuity and parallelisms of altered or reversed identity are so fascinating one might wish identity were made more consciously resonant as a theme.

Tarantino also makes ample use of his fetish for ritual deal-making as a motor behind scenes and action. Col. Landa makes a tough deal with the dairy farmer in the opener. Lt. Aldo Raine (Pitt) is ready to bargain with Nazis, letting them keep their lives and their scalps if they'll give up German military information. At the end, Landa makes the biggest deal of all -- his life for, well, the Third Reich, basically.

A big element is the celebration of movies, not only by the climax in a movie house, but in the constant references to old ones, to the point that Inglourious Basterds, the title itself a deliberate corruption of the English title of a schlock Italian WWII film, Enzo Castellari's Quel maledetto treno blindato, becomes more than anything a war movie about war movies. At times the whole effort threatens to get mired in material that is too familiar -- the nasty Nazis, the drinking scenes, the face offs, the suspenseful plots -- tropes executed often and with more gravitas, if less panache, elsewhere. Though inherently sui generis, Quentin Tarantino's movies have never been about originality, any more than they're about "reality." They're ingenious fantasies, built up out of cinema, delighting in the magic of what can happen on the screen.

And after all World War II was always movies, too, and propaganda. The "Basterds" -- the team of Jews out to give individual Nazis horrible deaths -- carry out their actions primarily as a propaganda weapon, its effectiveness underlined by the film's moments of gruesome brutality. Propaganda also is the movie "Nation's Pride," made starring Zoller, depicting how he singlehandedly killed 300 men, For that, Tarantino gives us something it's surprising he's not done before, a movie-within-a-movie. Zoller calls himself "the German Sgt. York." Tarantino does not resist the temptation (how could he?) to put his versions of Goebbels (a very juicy Sylvester Groth) as well as Hitler, and even, off in the corner of a scene, Churchill, on the screen.

Also present is the quintessential Tarantino theme: revenge. The "Basterds" are having revenge for the annihilation of Jews. Zoller's insistence that the premiere be transferred to Shoshanna's cinema gives her the idea of wreaking vengeance on a whole auditorium full of Nazis for the brutal killing of her family.

Things get very complicated when three plots by the British, the "Basterds," and Shoshanna -- with her black French boyfriend Marcel (Jacky Ido) -- all converge on the premiere of "Nation's Pride" at Shoshann's theater (with some confusion of the continuity in the lead-up to this event).

Whether or not you buy (or at some points can even stomach) the whole thing, the production is lush, the acting is rich, the set-pieces, however torturous, are impossible to look away from, and there's a fascinating interweaving of almost-themes. This is Tarantino -- and his big team -- working at full-bore. Waltz (who won Best Actor for this performance at Cannes) carries the day, but the film is alive with all the people in it. Brad Pitt, with his down-home shtick, his heavily drawn rustic tough guy and deliberately campy Ozark accent, though his character is not as funny or as vivid as stuff in Full Metal Jacket, is still quite entertaining, the heart of a style of movie in which comedy constantly turns scary and horrifying. Pitt's Lt. Aldo Raine 9the name itself a war movie tribute) in turn gets his chance, like so many others, to put on a (in his case comically clumsy) fake identity. There are only two important female characters, played by Mélanie Laurent and Diana Kruger, but both are fine and memorable. All in all Inglourious Basterds is troubling, drawn-out, brilliant -- and not to be missed. The answer to whether we can stomach the outrage and irreverence is that we just have to: Tarantino makes his own rules. 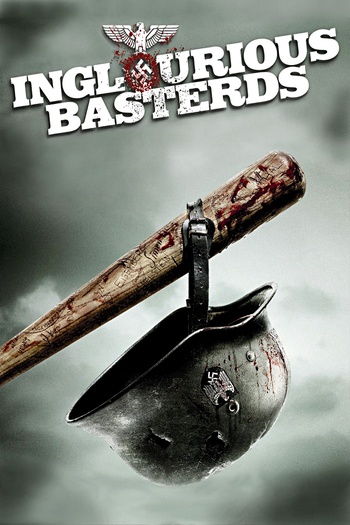