The beginnings of venture capital and historic West Coast startups

Venture capital and its key role in tech startups over the past four decades are the topics of this little documentary. It describes the first venture capitalists, who funded funny little companies like Apple, Intel, Google, Genentech, Cisco, Tandem and Atari. This is the seventh film from the documentary team of Dayna Goldfine and Dan Geller (previous efforts have concerned Sundance, Isadora Duncan, and the Ballets Russes).

This begins with Arthur Rock, a Wall Street banker, in 1957, who funded "the Traitorous Eight," a group of engineers in California who broke away from William Shockley, the Nobel winning semiconductor guy, who was hard to work for. Rock seems to have invented the idea of venture capital, and the idea of a breakaway group of smart young guys starting their own company, both new ideas at the time. His bank's Wall Street wealthy weren't interested in investing in California, and a lot of big companies turned Rock down. But a a wealthy entrepreneur called Fairchild came up with the $1.5 million Rock was looking for, and Fairchild Semiconductor was born, in Mountain View. It was the beginning of Silicon Valley.

Maybe the next really significant story, after a lot of venture capital and startups and the growth of Silican Valley, is Kleiner Perkins in the late Seventies achieving success with Tandem Computers. (KPCB, Kleiner, Perkins Caufield and Byers, begun by Eugene Kleiner, Tom Perkins, Frank J. Caufield, and Brook Byers in 1972, is the world's largest venture capital firm.) Tandem Computers broke away from the dominance of IBM and developed foolproof computers that are still used by Wall Street, airlines, credit card companies -- settings where computer breakdown and loss of data are not acceptable outcomes. Tandem became a Fortune 500 company. Kleiner Perkins began with an investment of $1.4 million in 1974, and sold Tandem to Compaq for $3 billion in 1997.

Next comes Atari and the eccentric Nolan Bushnell and "home Pong," the first compact non-coin operated computer game, which finally got going through Sears in 1975 after a hard time finding investors. Of course now, computer games account for a third of all consumer entertainment spending in the US. Next big story: venture capitalist/promoter Bob Swansan and scientist Herbert Boyer and Genenech, the beginnings of genetic engineering, soon to be used to produce drugs on a vast scale and save hundreds of thousands of lives. And of course make tons of money. This is another thing of Kleiner Perkins, and the debonair, elegant Tom Perkins is one of the main narrators of the film's story. Genentech began with an investment of $250,000 (they kept it low by subcontracting the labs) in 1976, and ended for Kleiner Perkins when they sold Genentech to Roche for $47 billion in 2009.

These stories are all great and there's just one after another. Next, again 1976, Wozniak and Jobs, a scruffy, arrogant pair who tended to turn off investors, find Mike Markkula, retired at 32 from Intel, who comes out of retirement to find a tiny investment to get Apple started with a home computer. Arthur Rock, our starting point venture capitalist, is called in. Initial investments: Mike Markkula, $142,000, Arthur Rock, $57,000, and Don Valentine, $150,000. The 2010 market value of Apple? $220 billion. Nice return, eh?

Okay, but venture capital investments often fail, or bring only mediocre return, or just sit there and eat up investors' time and energy. Thus Power Point presentation software lost its backers, one guy took it on, and he and a few others sold it later to Microsoft. Their big mistake? The could have taken the buyout in Microsoft stock, but took cash, losing an untold amount of wealth they'd have gained if they'd taken the stock.

Cisco Systems is an Internet story and a restructuring drama. The company run by a couple at home ran routers, which in 1984 didn't yet mean anything. Cisco is an example of the necessity of firing heads of companies for them to move forward. The founding couple were hard to deal with, and for the structure, the many vice presidents, to continue, they had to go, and they did. They went away, in their mid-thirties, with $170 million, but they have never forgiven the venture capitalists who okayed their removal. Sandy (the Cisco wife) went on to create a lot of other companies through investment. Cisco began with an investment by Sequoia of $2.8 million in 1987. It's 2010 value was $150 billion.

The stories are simple. And the conclusion is simple. Venture capital is nothing without entrepreneurship. But new things don't get started as well, or maybe not at all, without men with money willing to take chances on new ideas. Since 1960 the filmmakers figure venture capital has invested over $450 billion and started over 27,000 companies. As Atari founder Nolan Bushnell puts it, without venture capitalists, "the future wouldn't get started nearly as quickly." That's the useful message of this succinct 85 min. film. Something Ventured doesn't go into deep analysis of its stories. What about other personal computer ideas besides Apple, for instance? What about other venture capitalists besides its leading figures? But the film provides a straightforward survey of some of the major tech company startups and the role played by money in getting them going.

Seen and reviewed as part of the San Francisco International Film Festival, April-May 2011. A Zeitgeist Films release. This film debuted at the SXSW festival in Austin, Texas. Film websie: http://www.somethingventuredthemovie.com/about-the-film.php. 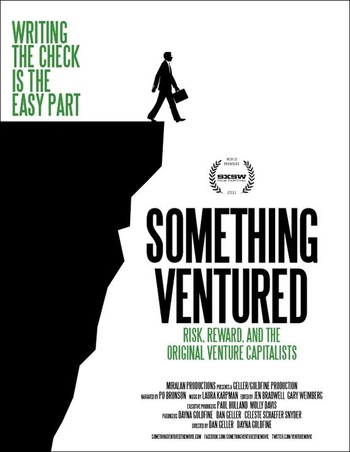