Ok lets start by saying that this film is the absolute mutts nuts, as a movie experience, summer blockbuster, kick-ass action film and comic book lovers dream film it is pretty much flawless. I've even tried to deliberately find fault with it thinking to myself that there must be at least one bit that could have been done differently but I don't think there is.

When the strategy for an Avengers movie was unveiled some 5 years ago I had some serious reservations. I just didn't think it could be done without being a complete visual and character mess. I've been a comic reader for 25 years and I know how easily and often an action sequence or major storyline can be botched over a few pages let alone a 2 hour plus movie. Also recent movies have proven that a visual spectacle doesn't guarantee an amazing movie experience (Transformers, Battleship).

Where this film succeeds is in allowing the chracters to grow within the action taking place and each character is given plenty of screen time to establish themselves with the audience. For me the stand out character is Mark Ruffalo as Banner/Hulk, Marvel has seemed to struggle cinematically with this character in the past despite me being a fan of the Ed Norton version. Ruffalos portrayal adds a level of humanity to the Hulk which helps the audience connect with him and also is the source of some of the movies funniest moments. Twice the movie had me laughing out loud and envoked the cinema into spontaneous applause and both times due to the Hulk.
Other reviews have mentioned how quickly the film seems to pass and thats very true it really does fly by and they cram so much into the 2 plus hours. I cant remember the last film I saw with so many memroable set pieces.
I've chatted to a few friends who have seen the movie and the one criticism i've heard is the 3D being difficult to follow. I had the same problem with Transformers 3 as on a normal sized screen the speed of sequences can be hard to follow. I went to see Avengers on IMAX and had no such problem as the size of the screen gives the images space. So i'd say either go and see this 2D or IMAX to ensure a flawless experience.

One last thing and ever so slightly spoilery but the post credit sequence has generated quite a bit of online discussion. I can see that the casual fan would be confused but for the geeky it is a superb teaser. I can't help but think that DC will be kicking themselves that they didn't introduce Darkseid somehow in either their last Superman or Green Lantern film because Marvel have pulled the rug out from underneath them.

In conclusion as excited as I am about other films this year (Dark Knight Rises and Prometheus) I'd be very amazed if I have as much fun at the cinema this year as I did watching Avengers. This film could've have been executed half as good and still been a success. They really have nailed it. 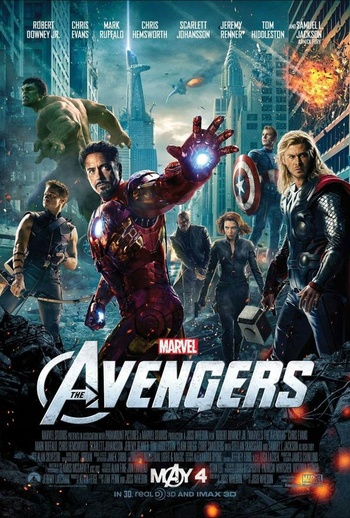