I’d done my best to avoid spoilers and tv spots about Prometheus but had my first sneak peak when I went to see Avengers in IMAX and saw the trailer in full 3D IMAX glory. It looked immense and the best use of 3D I’d seen since Avatar. Unfortunately I was not able to see Prometheus in IMAX and although in 3D I found it beautiful and immersive, I couldn’t help but wish that I’d experienced it with the size and depth of the IMAX screen, so make sure you see it on the biggest screen you can. Like Avengers last month this is the kind of film made for the cinema screen, it truly felt like an event going to see it and one I was excited about and definitely not disappointed with.

I’ll refrain from anything too spoilery as there are certain treats to be had from seeing this film knowing as little as possible but I felt the balance was perfect between this being a standalone movie and part of the Alien family. It provides just enough for Xenomorph lovers to be satisfied without being too obvious and clichéd. The movie is a bold piece of filmmaking and somewhat of a risk for Ridley Scott but one that has paid off.

There was so much that could’ve gone wrong with this one considering he has returned to the genre that defined his ability as a great director. It doesn’t always work, just as Francis Ford Coppola about Godfather III. It is a beautifully shot movie with simply stunning cinematography. Every shot from the movie has purpose and is so well crafted that you feel truly immersed in this alien world. There had been so many screen shots that a couple of websites have joked that you could view the whole film by collecting them in a flip book but rest assured you definitely cannot!

On a personal note this film appealed to me in its creational message. Although it doesn’t completely shun the traditional religious route, the thought of us being descended from an alien race is something I consider a bigger possibility than a bearded self centred joke in the sky so this film gave me a vision of something I very much wanted to see and that made me excited and uneasy in parts. I think it is this challenge of the foundations of creation that gave the film a R rating in the US. Yes there is violence but here is no nudity, no swearing and the violence and gore is limited so apart from the non-Christian message I’m at a loss at the extreme rating, Please feel free to enter your thoughts below.

My last comment is on Michael Fassbender who is truly the star performance in the film. For a character that is devoid of human emotion and an android he is the one character that I related to the most as I found his inquisitive nature the most natural. Also kudos to  Fassbender for being one of the most chameleon like actors in the industry at the moment. He is truly an amazing actor and deserves praise for his recent turns in X-Men First Class, Shame and Prometheus. Next James Bond???

Anyway doubtful this will be widely read but comments, abuse and opinions always welcome and feel free to follow me on Twitter @dmayerl 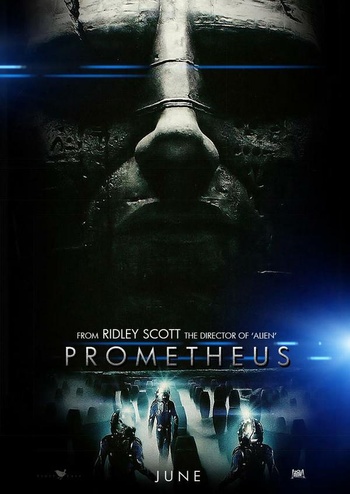