This is the first film I've seen by director Kim Ki-duk, and I'll put it in the "Magic Realism" genre. The movie stars Lee Seung-yeon as our hero, Jae Hee as our heroine. As far as I can remember, the characters they play never say a word to each other until the final scene.

The movie has dialogue from other characters, but the dialogue is brief and sometimes not well-written. Lee's character (Sun-hwa) is apparently homeless; he posts take-out menus on doors then circulates back to see which doors still have the menus on them the next day. He picks the locks of supposedly vacant homes or apartments and spends a night or two -- he listens to the answering machine to see if people have said they'll be away. While he's there, he fixes whatever is broken and does the people's laundry.

His hand-out locations vary from quaint old cottages to urban high rises to mid-rises for the poor. He finds one apparently vacant home in a very well-to-do neighborhood and breaks in. He wanders through the home, finds that the scales need to be repaired, does so, and plays some golf in the backyard before noticing that the home is indeed occupied.

It turns out the owner is away on business, but his wife (named Tae-suk) remains; she shows the bruises and busted lip of their last discussion. She's a prisoner in her own home, and our young hero is a free-spirit with no home. It's a match made in heaven. She runs off with him on his motorcycle, and we see many scenes of them handing out flyers, picking the locks of vacant homes, and doing laundry.

There are no scenes of them making love. We see them chastely sleeping together fully clothed but embracing. Nothing in the movie indicated to me that they had sex. It seemed a spiritual pairing. However, it may be that I'm missing some hint or other.

The title of the movie comes from the 3 iron that Sun-hwa finds in the home occupied by Tae-suk and her beater. The husband comes home early, takes her to task for not answering his phone calls, and discovers Sun-hwa lurking in the back yard. Sun-hwa takes the 3 iron and drives several golf balls into the husband, knocking him down; Sun-hwa and Tae-suk make their escape on his motorcycle. Sun-hwa takes the 3 iron and a ball with him. He drills a hole through the ball, wraps some wire through it and around a tree, and hits the ball with the club. Tae-suk stands in front where he'll hit her with the club if he strikes the ball; he moves, she moves, this happens till she stops. He hits the ball with enough force to break it free of the wire. We hear the sound of a crash. The ball has gone through the windshield of a car and struck the woman passenger. The driver, a man, pleads with her to respond to him. Sun-hwa and Tae-suk leave the scene, Sun-hwa showing remorse.

I consider this a problem, as we have seen Sun-hwa as a moral person. It troubles me that he would leave without taking responsibility for the injury, perhaps death, that he caused. Kim wrote the script as well as directed, and he seems untroubled by having his hero leave without paying any penalty for having caused the injury.

Our couple continues their pattern of handing out flyers, finding a vacant apartment, and staying overnight. Nothing much happens during these scenes with nothing being said, and yet we follow their meandering path with interest and feeling. Eventually someone discovers them and calls the police. The police investigate but find no evidence of any crimes, no thefts, only repairs and clean laundry. Tae-suk is returned to her husband, and Sun-hwa is sent to jail for breaking and entering where he serves a short sentence.

Now is where the magic realism comes in to play. Sun-hwa hides from his jailer, causing the jailer to beat him and threaten to kill him. Sun-hwa becomes better and better at hiding, becoming capable of standing behind the jailer out of his view no matter how the jailer twists and turns. Eventually, he becomes invisible to the jailer. The jailer constantly threatens Sun-hwa with death and beats him each time. When it comes time to release Sun-hwa, he is escorted down a tunnel to a light at the end of the tunnel.

Apparently Sun-hwa revisits each of the places he stayed with Tae-suk; I say apparently because there is evidence of his ghostly presence, but neither we nor the occupants ever see him, although the occupants are aware of a presence. He goes to Tae-suk's home, and while her husband can't see him hiding behind him, Tae-suk does see Sun-hwa and tells him she loves him. Her husband is shocked and pleased because he assumes she's addressing him. Tae-suk fixes her husband breakfast, placing bowls around him so that as he turns to one serving, Sun-hwa steals a bite from another, both husband and loved one being filled from the same offerings.

The husband leaves, and we see the lovers embrace, standing on a scale that reads zero.

We saw Sun-hwa fix the scale earlier. If we paid attention, we know his weight shown before he fixed it, his weight after he fixed it, and her weight after he fixed it. We saw Tae-suk take the scale apart after she was returned to her husband, so she may have restored it to its former error, and we know their combined weight would take the broken scale back to zero if they both stood on it. So we can imagine that the unrepaired the scale and their combined weights plus the error is the 180 kilos which takes us back to zero. Or we can imagine that the yin and yang of their love is weightless. Or we can imagine that he was beaten to death in prison and that he is, indeed, a ghost whose spirit lifts her body so that it, too, is weightless. It's an interesting film with a spiritualism that is not heavy-handed.

Because of the ending, we get to fill the movie with meanings and emotions of our own. Of the places they stayed, only one couple was happy, and they both return to it separately to spend some time again. It's an easy movie to put meaning into as we see the empty apartments and lives of others in Seoul. It's a fascinating and interesting love story.

The version of the movie that I saw is rated R in American. This is a travesty. There is no nudity, and there is no sex. Apparently two scenes caused the MPAA to lose its mind: in one scene we see him under a sheet looking at a book of photographs with a nude model; his hand is jerking back and forth under the sheet, so we assume he's masturbating. In another scene after Tae-suk was returned to her husband, we see them get into bed, both in pajamas. Her husband puts his hand under the sheet and demands to know if "he touched you there." Our assumption is that he's asking if she's had sex with Sun-hwa. Why this deserved an R is a mystery to me. 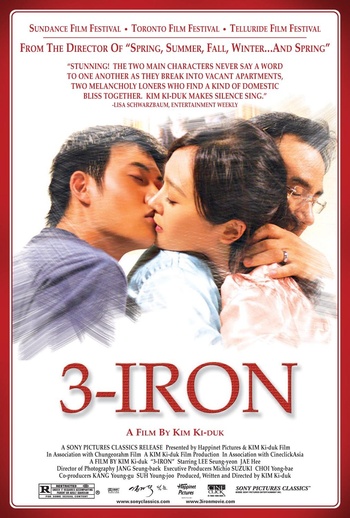