This motion-capture film is directed by James Cameron. I saw it in 3D Imax, and I recommend that version for the effects. The plot is nothing special: boy meets girl, boy loses girl, boy gets girl. Cameron was obvious with the plotline.

Our hero is Jake Sully, and he's a paraplegic whose twin brother died. His twin was scheduled to control an avatar on the planet Pandora, an avatar cued to his DNA. Since they were twins, Jake can take his place but hasn't had the training, so we get to watch Jake get all the stuff explained to him so we know what's going on. Obvious plot device. Generally, the planet Pandora has a mineral we want for commercial purposes, but the planet is inhabited by people who are connected physically and spiritually to the entire planet and its biosphere, and these people don't want us taking their stuff. Jake is sent to the planet's surface where he assumes the shape of a local inhabitant through the magic of science - he's an avatar with full mobility again. His goals are (a) get the inhabitants to agree to us taking the mineral and (b) failing that, discover how to destroy their home most effectively so we can take the mineral with least cost (in lives and money). Naturally, Jake falls in love and becomes one with the planet himself. He leads the aliens to a successful uprising against the hostile corporate take over.

The plot has been compared to "Pocahontas" and "Dances with Wolves." I'd guess that's fairly accurate. It's not a bad movie as movies go - good action, great effects. The bad guys are too cartoonish for my tastes, and the ending is deus ex machina, which I didn't like. However, the 3D Imax experience overwhelmed my sense of good film and gave me enough pleasure to like the movie.

The effects people and the art and visual designers really knocked my socks off. One of the problems with computer-generated imagery and motion capture movies is the sterility of the "sets" and the lack of grounding of the characters in the world they're supposed to be inhabiting. When real people walk the real ground, they affect the ground - when cartoon characters walk on the ground, there's no disturbance. "Avatar" gets around this in part by having a world that is phosphorescent, so when the characters step on things, the things glow. In other scenes, however, the computer-generated characters float on the ground without interacting with it. There's no real feedback from the environment to the characters. When wind blows through the aliens' hair, it's a romantic effect, not the real wind dragging hair in people's faces that they have to push out of the way.

The visuals were compelling - I got a little motion sick from some scenes, just as I would have in real life. The 3D camera work really works - I felt some of the objects were definitely in front of the movie screen - and Cameron didn't play it for cheap thrills. (They were very expensive thrills.) I think "Avatar" is a major step forward in motion picture production, comparable to the coming of sound and color.

There are, of course, problems. Motion capture means we don't see actors. We see computer-generated characters. Whether you can invest yourself and your caring in what is basically a cartoon is not something I can predict. I don't foresee motion capture as a wave of the future, but that may be a reflection of my generation rather than an accurate forecast. My habit has been to see and care about characters played by Jimmy Stewart, Humphrey Bogart, Morton Downey, Jr., George Clooney; Meryl Streep, Audrey Hepburn, Tilda Swinton, Ingrid Bergman. I'd go see a movie solely because it stars one of my favorite actors, but not because it "stars" a motion capture.

Additionally, the bad guys were so overdone they left me vaguely sick. There were no redeeming virtues - the bad guys were bad all the way through. They were bad because that's how it was in the script - we had no background that gave us reasons; we had no internal struggles with what would have been right. I'd contrast these cartoons with Heath Ledger's The Joker in "The Dark Knight." His character was fully developed, and we understood his evil and felt sorry for him. In "Avatar," Quaritch and Selfridge had no depth.

I was caught up in the story of "Avatar" -- there's a reason the boy meets girl, boy loses girl, boy gets girl plot is so often used. But frankly, we all knew what was going to happen. Plot turns were telegraphed, victory was unwinnable but assured; Jake gets the girl; everyone that should live happily ever after does live happily ever after, and the bay guy gets is due. The movie was almost three hours long, but it never dragged. Cameron did a lot wrong, but he got more right.

Ultimately, the world Cameron created worked for me. I think, though, that seeing it in 3D Imax made a significant difference from watching in 2D. I recommend seeing the film in 3D if at all possible. I think the 3D Imax effects cover up a lot of sins.

NOTES ABOUT IDEOLOGY AND SOME AMERICAN OBJECTIONS. Nothing to read about if you haven't seen the movie. Don't go beyond here and make up your own mind.

Some Americans see this movie as anti-American, anti-capitalism, and anti-religion. While I'll lend some credence to those points of view, they're overblown. I've read about pre-literate humans and their rituals for thanking the animals for sacrificing their lives so that the humans might eat them, and the aliens in "Avatar" have this same ritual. I think having it here helps establish the world of the aliens and connects me to it: their world is the world of our Stone Age ancestors, where everything is connected and life is lived among creatures who have a right to exist. This is the basis for the objection to taking the minerals from the planet. It all has a right to exist.

By casting the villain as corporation with military muscle, Cameron picked an obvious target. He did it badly, though, and that's my objection. It's possible to read the movie as a rant against the rape of our planet. It's possible to read the assault on a Stone Age populace as an attack on American military ventures in the Middle East. It's possible to see the exposition of the alien "religion" as an attack on American monotheism. I though it was just a movie with good action and great special effects. It wasn't good enough for me to take seriously as a metaphor for anything. From my point of view, the people who were offended by the movie tell me more about themselves than they do about the movie. Your mileage will vary. 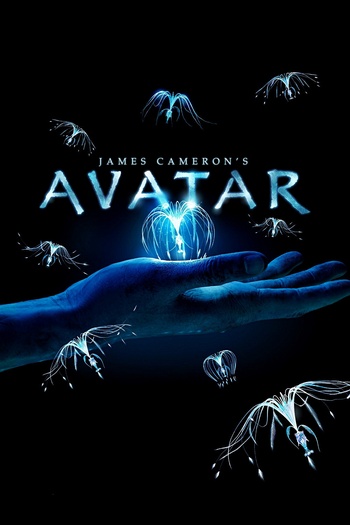