An enchanting film. It gets off to a slow start, but once the two women get off to their vacation, things pick up, and we get an engrossing story.

The story was filmed as a mini-series for the BBC in 1992, and it was released theatrically in the US. The story takes place in England in the Twenties, and Lottie (played by Josie Lawrence) is sick of the weather - it's March - dreary, and rainy. Lottie and Rose (Miranda Richardson) become acquainted and are unhappy in their marriages, so they decide to rent a villa in Italy for the month of April. They can't quite afford it, though, so they advertise for another two ladies, and a more dissimilar quartet would be hard to imagine. Lottie's and Rose's husbands are played by Alfred Molino and Jim Broadbent, and all four are excellent. Joan Plowright and Polly Walker play the other two woman sharing the villa.

Things get off to a rocky start and the ladies defend their turf and come to terms about who shall dominate whom. But the Italian April works its enchantment on them, and soon things go much better. Lottie decides to invite her husband to see if the magic can help them reconcile. Rose then writes to her husband to invite him. Then things get sticky. Jim Broadbent's character has been chasing Polly Walker's character unknown to Rose; Rose is being pursued by the owner of the villa.

The resolution of the various threads is well done, and the ending is satisfying. If you like this movie, I recommend "Smiles of a Summer Night" and vice versa. 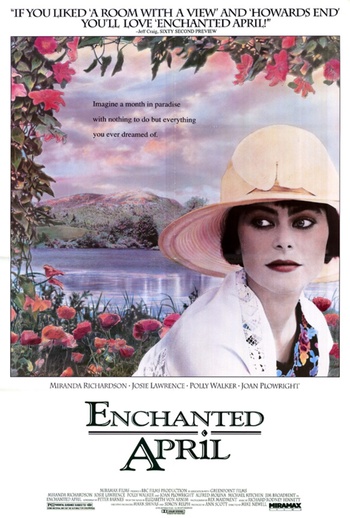