It's an interesting trick, and we even get to like Leonard (Guy Pearce) as we watch him struggle to find and kill the man who murdered his wife. The fun of the movie is figuring out what the heck is going on.

Unfortunately, the movie is only a trick. Directed by Christopher Nolan, who wrote the screenplay, the film is based on a short story by his brother Jonathan Nolan. Although we may root for Leonard, we find out in the end that he's been used and manipulated not only by Teddy (Joe Pantoliano), but by Natalie (Carrie-Ann Moss). And actually, Natalie is the main character here; she's the one we could have had feelings for as she plotted and planned her revenge with stunning originality and great care. But we never get a feel for her loss, for her. If you read the IMDB's bulletin board on this movie, almost all the posts are about figuring out what happened, matching timelines, and figuring out what all the clues were. Few people seem to care about Leonard and Catherine (his dead wife), nor about Natalie. In context, the fact that the characters aren't as important as the plot device is not much of a loss, but it keeps Memento from being what I'd call a good film. It's good entertainment, but it doesn't give you anything to take with you for the rest of your life. Contrast this film with "Betrayal," where the reversal of the unity of Time works beautifully in a script by David Mamet, and you get a brief hour and a half of tragedy that you'll feel for days.

(NOTE: The movie is Memento, not Momento. Memento is a reminder of past events -- Leonard's tattoos are the memento of the movie. If you remember that memento is akin to memory, the word is quite a good title. Jonathon Nolan's short story is Memento Mori, and it's online at

Memento Mori is translated from Latin as "reminder of death" or "remember your death." Either way, also a good title.) 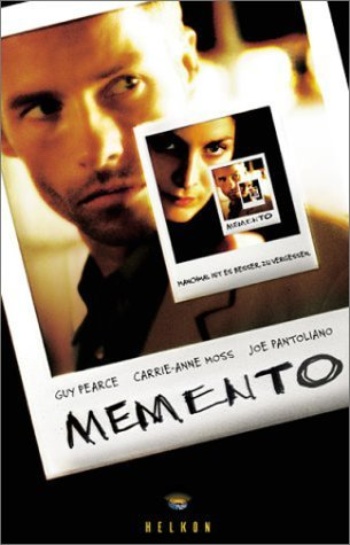