Punk is a strange genre.

Released in 1984, "Repo Man" is at the confluence of punk rock and generic brands. Starring Emilio Estevez as Otto, "Repo Man" is the hip story of disaffected youth. In the early 80s, men were still wearing wide lapels, paisley ties, and coiffed hair, and our hero in "Repo Man" has a buzz cut and a pierced ear sporting a cross. And when he drinks beer, it comes in a white can that says "BEER," and the can has a huge UPC on the side.

In addition to Mr. Estevez, we have the inimitable Harry Dean Stanton and Sy Richardson as Otto's mentors in the car repo business. Otto's fellow repo men are named Bud, Miller, Lite, and Oly. If you can see "Repo Man" on the big screen, I recommend it because the signs in the background are part of telling the story of the punk esthetics, with Mr. Stanton's voice over and Mr. Richardson's smooth lyricism. Read all the signs.

Among the strange things about the punk movement is how modern it still is. Compare the costumes here with, say, "Earth Girls Are Easy," a film released four years later. The costumes in EGAE are hopelessly dated, but you'd be hard pressed to put a year on "Repo Man" based on how people dressed.

And unlike EGAE, "Repo Man" still holds up. It's a funny movie still. 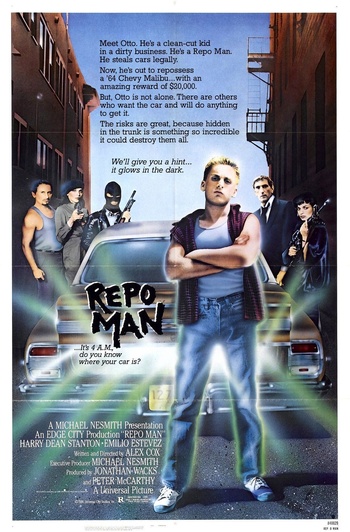