Directed by Jean-Pierre Ameris in 2010, this is a French romantic
comedy starring Benoît Poelvoorde and Isabelle Carré as the star-crossed lovers.

Actually, they're neurotic. The gist of the movie is that they're both so neurotic, neither can find a relationship of any kind. The movie follows Angélique Delange (played by Carré) in her search for a job that doesn't make her faint, and she meets Jean-René Van Den Hugde ( Poelvoorde) who hires her as a sales rep for his chocolate factory.

The movie is laugh-out-loud funny almost all the way through its girl meets boy, girl loses boy, girl gets boy plot. Their neuroses are played for laughs, of course, and each has enough foibles to keep you, if not in stitches, then at least in laughter. The movie has no depth, no lesson, but it has the light touch needed to keep things moving. If you want a very funny movie to while away an hour and a half or so, "Romantics Anonymous" is your ticket. 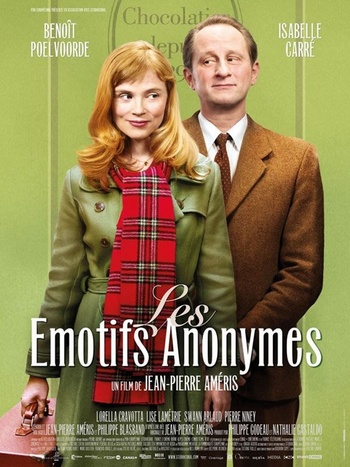