We open the movie seeing Lee Holloway (played by Maggie Gyllenhaal) being released from a mental hospital into the care of her mother. Lee gets a job as a secretary for lawyer E. Edward Grey (David Spader), and it turns out they share a fetish for mild sado-masochism. Lee is transformed from a mouse to a near-dominatrix masochist, and their employer- employee relationship blossoms into love and marriage.

This is a great film almost entirely because of Gyllenhaal. Lee Holloway's blossoming is the main driving force of the film, and Gyllenhaal inhabits the role beautifully. There are many scenes involving water that are magical, and Gyllenhaal's face shines as she floats in the tub or the pool (director Stephen Shainberg does an admirable job in these scenes and others). Although the film's plot revolves around a sado-masochistic relationship, sado-masochism never takes over -- the film remains about the relationship between Lee and Grey and Lee's blossoming under his tutelage.

This is a film which benefits from Spader's affectless acting style but which would fail completely were the actress portraying Lee to have the same flat style. Because the movie is about Lee's growth from her mousy girl to full sexual womanhood, having an actress who could show the full range of Lee's person is an absolute requirement. The viewer has to care about Lee for the movie to work. Caring about Grey would have been nice, but it turns out not to be necessary.

Set design lesson: The set of the film is an integral part of the movie. There is a long hall between Lee's desk and Grey's office. There are no other people in the office, and there is no architectural reason for that long hall. But it is absolutely necessary for the plot. There are scenes in the movie which show Lee crawling down the hall to Grey's office or walking along the hall with her arms chained to a bar across her shoulders, and Gyllenhaal exploits every inch of that hall, exuding sexuality. Although Grey is nominally the sadist in the relationship, Lee may have ultimate control -- indeed, it is at her demand that they marry. And you know it will be a fulfilling marriage. 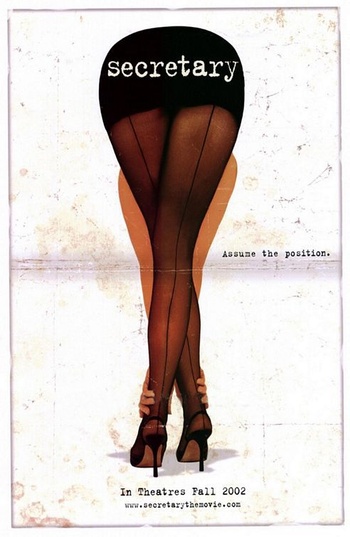