This is a fascinating film by Tarsem Singh which doesn't quite work for me.

A little girl and a handsome young man are in the hospital, she for a broken arm, he for a broken back. Alexandria (played by Catinca Untaru) and Roy (Lee Pace) pass the time by telling stories. Roy starts them out, but Alexandria visualizes them, so we have a cross fertilization which can be surprising and funny, but which is always breathtaking. Alexandria is about 11, and her visualization of the tales includes those around her, so (as in "The Singing Detective"), we have the hospital staff pulling dual roles as Alexander the Great, a princess, heroes, and villains.

The costuming is some of the best I've seen, and the cinematography (by Colin Watkinson) is wonderful. IMDB says Tarsem Singh disclaims all trickery -- what you see on the screen is what he actually filmed, with no special effects. The scenery and action is so breathtaking, I actually doubt this. It's that good.

I really liked the movie. On one level, it's a hospital story about the blossoming friendship between two people, one of whom is a little girl. Ms. Untaru is captivating as the girl, with no evidence of acting at all. Little Alexandria is utterly guileless as Roy cunningly uses her to collect morphine tablets for him.

On another level, it's a fantasy initiated in the mind of Roy who is killing time that lays heavy on his shoulders but kicked into fantastic overdrive by the bored little girl stuck in the hospital with a broken arm. Because of the intertwining of the characters in the hospital with her fertile imagination of the tale, we have some hints of magical realism as she encounters the characters in both the fantasy and the reality worlds she inhabits.

On another level, it's a swashbuckling hero movie where a team of five swear to defeat the evil doer who has done each of them a wrong. It's here, though, that the movie let me down. Each of the five is a character, and unlike "The Princess Bride," for example, there's no real warmth among them, no feelings between them, no camaraderie. Just five guys with the same goal. It's unfortunate, because we spend a great deal of time watching them strive for their goal, but I never had any feelings for them during their various ordeals. Because of that lack of emotion among the five heroes, it misses the sweeping epic saga-ness it should have had as we watched the epic grandeur of the settings and costumes (designed by Eiko Ishioka) and listened to the epic music (Beethoven's Symphony No.7 in A major op.92, 2d movement, allegretto, for example).

I recommend the movie in spite of that one shortcoming. It's based on a Bulgarian movie by the name of "Yo Ho Ho," which I've never seen or even heard of. 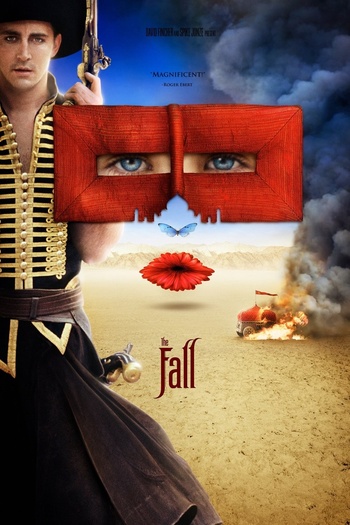