It's in black and white, the opening scenes are not well-acted, and the sound is not good. After awhile I was thinking this would segue into a color film that would explain that this was an early film by Ed Wood or John Waters -- you know, before they got good. But no.

"The Honeymoon Killers" opened in 1969. I saw the movie on DVD, with an interview of the screen writer and director, Leonard Kastle. He said it was a direct response to "Bonnie and Clyde," which he despised. "Bonnie and Clyde" had Warren Beatty and Faye Dunaway as the leads, of course, and glamorized Barrow and Parker and their violence. Kastle said he wanted to make a more realistic movie and picked a couple called "the lonely hearts killers."

Kastle said in the interview that he had just written an opera and that it was being performed in LA, when an acquaintance of his suggested that they do a movie. There was $150,000 available, so Kastle wrote a script, they hired new-comer Martin Scorsese to direct, and they started casting. They hired Tony Lo Bianco as Ray Fernandez and Shirley Stoler as Martha Beck. Lo Bianco is a recognizable face from the many movies he did in the 70s, and Stoler of course is famous for her role in "The Seven Beauties." The rest of the cast was drawn from local talent in upstate New York, when the movie was filmed.

Kastle said Scorsese was fired for taking too long; with a budget of $150,000, they had to shoot very quickly. The assistant director took over, but he was fired, too, so Kastle directed with the able assistance of cinematographer Oliver Wood. In the interview, Kastle said many of the scenes were filmed only once -- much of the movie was done in one take. I believe it. (The cinematography is excellent, by the way.) Lo Bianco was good given the material, and Stoler got better as the movie went on. In her opening scenes she was decidedly amateur; however, she got some real emotion going by the end.

The cast is amateurs, and the script is, too. I can't remember why this was in my list of movies to watch. Although the events depicted occurred in the late 1940s, no attempt is made to set the movie in that time; all the costumes and cars are current for 1969. An end card on the movie tells us that the couple was executed in 1951.

It gets rave reviews on IMDB and is called elsewhere a cult classic. It's beyond me why. It's interesting to watch a movie Scorses got fired from; according to the interview with Kastle, Scorsese directed the scenes at the lake. Given Kastle's sensibilities as shown in the interview, I can understand why Kastle let him go. I think it was the right decision. But it's interesting to contemplate "The Honeymoon Killers" as it would have been if Scorsese had been able to finish.

"The Mating Call," a silent movie directed by James Cruze in 1928 does the same thing with costumes: the movie is set in the years of World War I and just after, but the costumes are current for the year it was made. This worked for me because of the modern sensibilities of the characters and the plot. "The Seven Beauties" is one of the most depressing movies ever, but it's well worth watching for Stoler's performance, for Giancarlo Gianinni's performance, and for the script. After you've watched "The Seven Beauties," watch Mike Nichols's "Catch 22." You'll understand. In his interview, Leonard Kastle says although he's open for another movie, no one in Hollywood has come calling. I understand. 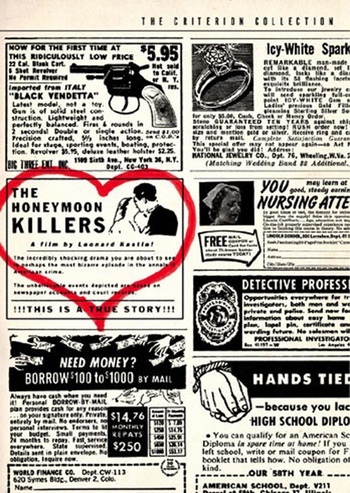