My London Film Festival ended up with non festival related press screening of Anonymous by Roland Emmerich. First of all- WHAT? Why would any organiser of any respectable festival decided to screen this guy’s film? It’s not like Emmerich has ever given anyone any hope that he can make good films. It’s just like inviting Uwe Boll to some prestigious awards, so he can beat some critics up, I guess. Somehow though, after seeing Anonymous, Sandra Hebron thought that Emmerich should be given a chance and to my disappointment, some critics believe that it was a chance worth giving.

Let’s not be cheated by Emmerich’s fake love towards British culture. I have never in my life been so offended by a film, and I’m not even British. It’s not because the theory itself is offensive; I can understand that some people believe that William Shakespeare did not write plays that have been published under his name, but does it really make him the stupidest person in the entire England? Not only is he an asshole, but he is a pathetic asshole played by the most annoying guy from One Day (I know it’s difficult to choose the most annoying character from One Day, but bear with me- this is the guy who must be the father of Real Steel kid- and that says a lot about the annoyance level he provokes). So that’s Shakespeare offended.

Queen Elisabeth, by so many described as the greatest British monarch ever to live, is portrayed as an easily satisfied slut. She has more bastard sons than titles to give and no maternal instinct whatsoever. Also, she manages to commit incest in times when probably she was the most public person alive and still works her way around it. So take this, Britain.

When it comes to London, it is simply a bridge with some houses hanging around it. There’s also a theatre in which the plays are performed for mob, who with no education at all can easily follow the flowery land poetic language they are written in. I guess it’s only students who struggle with sixteenth century poetry.

not so anonymous anymore...

What offends me the most though is how truly boring Anonymous is. Even though I am into both English literature and sixteenth century history, I found the film pointlessly confusing, annoying and just dragging on for ages. Instead of focusing on one plot, Emmerich runs around the script like a madman introducing us to thousands of the same looking men with black hair and big collars. The final brings nothing but a sigh of relief that one survived the film. In the words of Shakespeare himself:

it is a tale
Told by an idiot, full of sound and fury,
Signifying nothing.

P.S. Here is a video of Roland Emmerich giving ten reasons why Shakespeare didn’t write his plays. I would like to hear ten reasons from you why you think Emmerich’s films were actually directed by a retarded alien...
http://youtu.be/arBk4fUlCrw 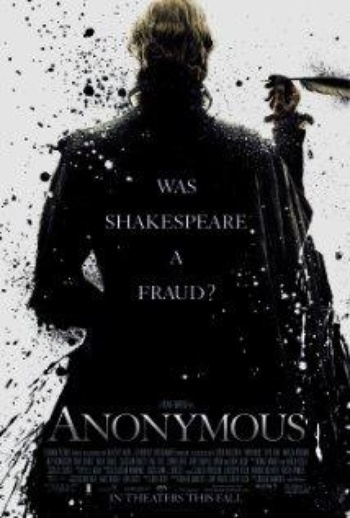