Two young startup guys, Ben (Max Minghella) and Sean (Emile Hirsh) take their app to Moscow, where they find their unscrupulous Swedish rival Skylar (Joel Kinnaman) has bypassed them and stolen their deal. Legal redress? Hardly an option in the post-Soviet gangland. Best just to drown their sorrows and meet some cute chicks. Partners and rival and distaff tourists Natalie (Olivia Thirlby) and Anne (Rachael Taylor) all wind up at Zvezda, the hippest club in town: Ben and Sean's app is designed to take young swingers to such joints wherever they may be, and designate eligible partners in pleasure. Not much time for kicking back, though. By the time they've all met up and downed a few vodkas, all hell breaks loose. The town, and maybe the planet, starts getting atomized by scary things from space.

Director Chris Gorak likes his darkness cool and his invaders invisible. His hostile critters aren't those giant insects from Central Casting but swirls of electrically charged yellow light that operate like high-powered airborne micro-wave ovens. It seems the resources they came for are those that promote electrical power. Gorak's CGI is used judiciously, with none of those numbing jumbles of crumbling freeways and buildings you get in the Transformers pictures.

Unfortunately however The Darkest Hour (released oddly enough on Christmas day) feels like a standard alien invasion flick in most respects, less wild and scary than Matt Reeves' 2008 Cloverfield (which has a better subway sequence) and lacking the local charm of Joe Cornish's Attack the Block (from this year).

Except for one bracing aspect: the main characters keep getting vaporized, one by one. A nihilistic youthful spirit prevails here. And logically, the alien-fighting equipment resembles the homemade flame throwers those slackers wield in Bellflower. It starts to look as if in a bold narrative move the writers are going to wipe out the entire cast. Alas, Gorek and his screenwriter Jon Spaihts lose their nerve at the end and leave us with a romantic couple, unvaporized, safely sailing away upon a dark sea in a cozy nuclear sub manned by friendly Russians, and, judging by final dialogue, lining themselves up for a sequel.

This is an American/Russian/German co-production (Russian title Фантом, Phantom), set in a nicely-photographed, gray-green and spookily unpopulated Moscow, which, for Anglo viewers, is a very exotic setting, even for aliens. The understated CGI highlights some striking events, like tall bands of yellow flame and the abrupt disintegration of the American embassy, not to mention the sudden vaporizing in air of numerous dogs and humans.

All in all, setting and images are just great. The nice look makes us appreciate Gorak's thorough background as an art director. All would be well were it not for the dialogue and the screenplay. Those never give us engaging situations or characters with any depth. The 3D, also understated, helps to highlight the emptiness and weirdness, though it's not as clearly necessary an element as the CGI for the survival of this movie -- which in any case is currently somewhat in doubt, given the generally horrible reviews.

Ho-hum, action-deadening scenes abound, including the young folks struggling around Moscow with an inadequate map, looking for the US Embassy; selecting alien-fighting outfits in a mall; hiding under a car as the electronic charged aliens swing around looking for them, in vain; running back to get a cohort so they can all take the nuclear sub out of town. Who thought up this stuff? Minghella has recently appeared in such quality items as The Social Network and The Ides of March; Hirsh's excellent roles include The Dangerous Lives of Altar Boys, Lords of Dogtown, and Into the Wild. This may have seemed a bold project in some ways, I suppose, and the involvement as a producer of Timur Bekmambetov, whose Russian pop sci-fi epics Day Watch and Night Watch were visionary mind-bogglers and huge box office, must have sweetened the bait.

But Bekmambetov didn't make this movie. The execution isn't up to the potential, due to huge shortcomings in that essential element, the script, and the lack of an ability to keep the action fast, suspenseful, and scary. 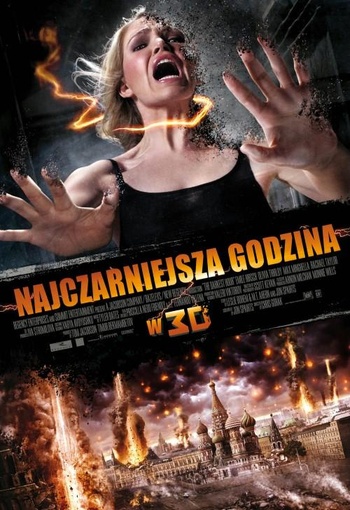