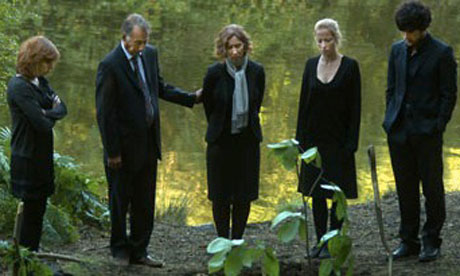 It seems to get harder and harder to support Independent film in Britain. For the enthusiasm and endeavour of the many filmmakers, the product never seems to match up. Unfortunately, directors Tom Kingsley and Will Sharpe fall into this trap. Their intentions for the film are clearly defined and the story itself is good. Through talking head interviews, we go back and witness the events of the Thompson family and what lead to their infamy.

Sitting someone between Bodou Saved From Drowning and an episode of 999, the script itself is good with some well written dialogue and interesting progression of the story. But for some reason none of this translates. Lines that I’m sure read well on paper seem flat as they are delivered. Which is strange again as most of the performances are good. Especially ‘The Thick of It’s Chris Langham who deserves further big screen outings.

I don’t know whether it is the budget, editing or design but I sat in the theatre and barely sniggered never mind laughed. I really don’t want to be as negative as I am about Black Pond, because I do have a small amount of admiration for everyone involved but sat alongside the best Independent films from outside the UK, this does not match up.