It's 1997 in Sierra Leone. The civil war is at its height. Rebels are fighting government troops for control of the country.

However, this battle is not only against the government troops, but also the civilian population. The rebels blame them for electing the government. As they rampage through villages, killing and raping whoever crosses their path, they also chop off hands and arms, as a warning against further such foolishness. The boy children are taken away as young conscripts into a brutal army. The war is funded by the sale of Sierra Leone's abundant diamonds. The so-called blood diamonds. Control of the diamond fields is as important as control of the parliament and both sides will fight to the death for them.

Although Blood Diamond tells a fictional story, the background is very real. I know, I was there. I was supposed to be on a flight into Sierra Leone on the day the rebels seized the capital. Fortunately my flight was cancelled. I went to neighbouring Guinea instead, where my job was to deal with the ex-patriot refugees. Apparently writer Charles Leavitt conducted extensive research before sitting down to re-write the script. He did an excellent job. The film to a very large extent reflects the reality of the situation.

The abstract political situation is brought to life by Leonardo Di Caprio as a Rhodesian mercenary, and Djimon Hounsou as a fisherman who are caught up in the conflict. Hounsou finds a diamond, but loses his son. Di Caprio loses a diamond but finds love. What's more important?

I have long failed to understand the appeal of Leonardo Di Caprio. Shutter Island is awful, not least because of him. The Aviator is good, but it would be better if he wasn't in it, and The Beach and Titantic just aren't worth talking about. But here, he is err... almost excellent. Words I thought I'd never hear come out my mouth! Even at the few points where the dialogue becomes a bit twee, and predictable, he rises above it. The rest of the cast are also excellent, and the film does a pretty good job of portraying the complexities of the situation, both on a political and personal level. The music is beautiful. As are the panoramic shots of the country.

On the downside, it feels a little formulaic in places. I guess it is Hollywood after all. And it's a little bit too pretty. Even the most vicious rebel and the poorest villager tends to look a bit like an extra from Miami Vice. But let's not quibble about the details. All in all a pretty good effort and a valuable insight into the very dirty world of the diamond trade. 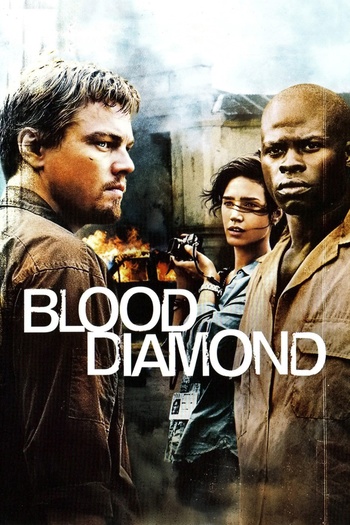