'Children of Men' starts dull, and ends up boring.

That's the one line review for people in a hurry, and to be honest, is as much time as is worth spending on this poor effort.

It's the United Kingdom in 2027. Illegal immigrants (or should that be refugees?) threaten to overwhelm society. The government has tight control over the population and most importantly, women are no longer fertile. Why does it matter? How did it happen? Who knows? Who cares? Through the usual plot device of a combination of unfortunate circumstances Theo (Clive Owen) ends up with the job of escorting the one pregnant female in the world to safety.

It doesn't start well. Clive Owen seems a bit stiff and self-conscious. However, after some awkward expositional dialogue to make sure we all understand where we are and what's going on, we're off. Michael Caine and Julianne Moore turn up and real acting can be observed on the screen. Unfortunately both Caine and Moore are dead by the half-way mark, which leaves little to look forward to.

For the second half of the film, we have to make do with the woeful Owen, in the company of a cartoon-like ooh-lordy-dear-have-your-waters-broken, chanting earth mother, and the pregnant woman herself. Fortunately the earth mother also dies well before the end. This leaves a final half hour filled with Owen and pregnant woman dodging bullets in an interminable battle scene. Into one room, out of another. Up, down. You get the idea, usual boring stuff. And of course, in the midst of all this, in graphic detail, a child is born. Yuk, yuk, yuk. The birth of the child has an unexpected positive effect. Next to the horrible, horrible overacting by the entirety of the rest of the cast, Owen doesn't look so bad.

There's more than a sprinkling of Monty Python in all this. If you remember the People's Front of Judea from 'The Life of Brian', you'll be tickled by the scene where the Fish (what kind of a stupid name is that?) hold their 'how do we save the world meeting?'. And the car chase across the British countryside reminded me a lot of 'Clockwise'. OK, not Monty Python, but close enough.

Two more grumps. The bloody animals. They're all over the place. There's bloody cats, dogs, cows. There's the obligatory flock of sheep running wild through the desolate streets of London which generally signifies the end of the world as we know it, when you've run out of other ideas. Of course most of these animals have an unexplained mystical affinity for Owen. Then there's the irritating quasi-religious soundtrack, which I imagine is supposed to imbue the film with some kind of universal message of sacred significance. It's just annoying.

Today, four years after its release, 'Children of Men' stands at number 194 in the imdb top 250. Above 'Mystic River', above 'Rocky', and above 'King Kong'. It looks like society really is headed in the wrong direction. 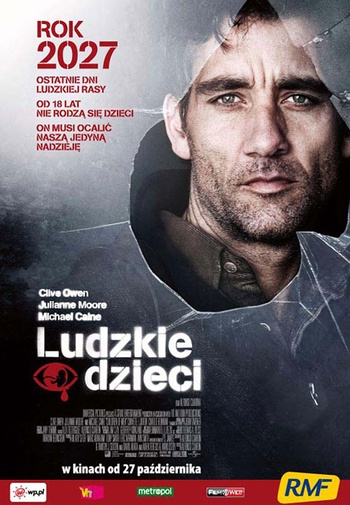