Apparently, these days, when you lose your job in Detroit, the economic situation in America is so dire that you have absolutely no alternative but to relocate to Beijing. And through this convoluted plot device, Rocky and his mother end up in China. Pint-size runs into trouble right away. He's bullied at school by the black-hat Kung Fu gang. Until the day when Hong Kong Phooey rescues him. Tense negotiations with the baddies trainer don't really help matters. They back off on the condition that Rocky participates in the kick-ass Kung Fu tournament. Hong Kong Phooey takes the young Padawan under his wing, and the rest is every cliché you've ever seen.

Where to start with this awful cheesy mess? First off, Jaden Smith is a lucky guy. Not many twelve year olds get to star in their own film. I guess it helps if your dad is Will Smith (remember ' The Pursuit of Happyness'?) He's in almost every frame, tries far too hard, and gets more and more annoying with each moment that passes. By the time he utters his Big Line, the tear-jerking "Because win or lose, I don't want to be afraid any more" I was ready to mash him to a pulp with my own hands. Curiously, despite the intense and prolonged training he undergoes, he doesn't develop the slightest bit of extra muscle. Like many other child stars, Smith is improbably good-looking. It remains to be seen if, like his predecessors, he self-destructs in later life.

Typically for a twelve year-old, Rocky is embarrassed and irritated by his mother (Taraji P. Henson), and so was I. Particularly when, after she has made it clear to young Rocky that he Must Not Fight with the other boys, she is first up to cheer him on as he knocks another kid out with a kick in the face. Then there's the whole son-with-dead-father meets father-with-dead-son blah blah. I could go on, but it's getting boring.

There are a few redeeming features. The photography is beautiful. There are some fabulous, panoramic, 'Lord of the Rings' stylee shots of the Great Wall. Including, of course, the required, young-fighter-trains-on-castle-battlements-at-top-of-high-mountain shot. Jackie Chan brings a little integrity to a cast that appears to be there solely so that Smith could get the occasional day off during filming. And hey, maybe a whole generation of twelve year old boys will put away their knives and kick each other senseless with their bare feet instead? 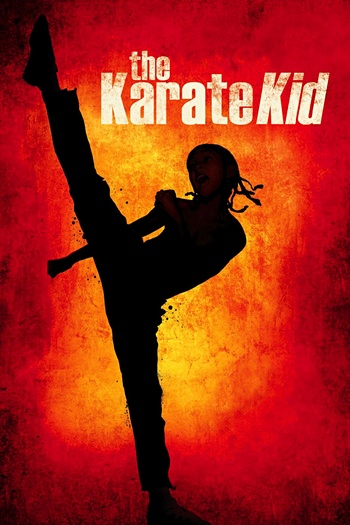