2012 contestant in Cannes for the Palme d’Or against Michael Haneke’s Amour.
Teresa is a lonely woman post her prime. Overweight, unable to communicate with her teenage daughter, at work dealing with retarded adults – her life is colourless.
She sets off on a journey to Kenya. In search of sunshine, in search of adventure, in search of entertainment.
Hanging out with three other overweight women her age, she learns about the phenomenon of local lovers. What she fails to learn is that a holiday romance should be a fair exchange rather than just obtainment. Teresa keeps having ethical and moral questions but fails to understand she should give something in return for moments of pleasure in the arms of young attractive men. When one of them tricks her into giving him money, Teresa gets angry. Her anger is unjustified given the game she decided to take part in. Yet, she fails to understand that.
It’s a sad story about cultural differences and post-colonial thinking which should have been changed about a hundred years ago. Somehow, it is visible in this film (which is to be followed by two more in the series) that certain way of thinking stays carved in white European brains and it will take ages to erase that. 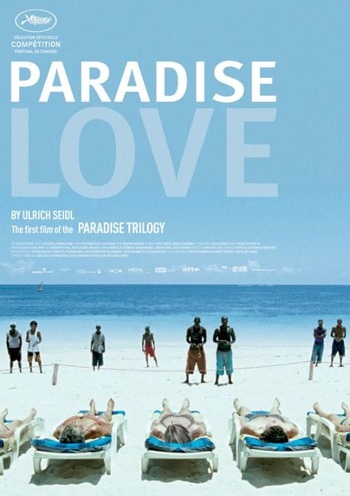