The first film I've seen at this year's Raindance Festival, A Thosand Kisses Deep opening words and title are from the Leonard Cohen song of the same name and through it's metaphor of relationships that don't quite make it to full fruition, it takes us on a subtly surreal journey through cause and effect. Mia and Ludwig, a tortured jazz musician with a drug habit, were once in a passionate but dark relationship leaving Mia emotionally scarred. After seeing an old woman commit suicide Mia becomes convinced the woman has some connection to her, and haplessly guided by Max, her elderly building caretaker, and a time travelling elevator 'with a mind of it's own' she travels back to face the love of her life and tries to put the timeline of her own existence back in sync and attempt to change the outcome of the old woman's tragic end and in doing so discovers some of the darker secrets of her history of which she was previously unaware.

The film looks expensive for an indie, it is quite beautiful, with smashing cinematography by George Richmond and compelling acting by leads, Dougray Scott and Jodie Whittaker. Compelling too is the beautiful jazz music that permeates the plot. Dougray learned to play the trumpet for his part and gives a convincing passion to the troubled musical soul of Ludwig and his dark impact on the lives of those embroiled with him.

There are also decent performances by David Warner, Emilia Fox and Jonathan Slinger though a couple of other actors in the film give charming but less effective efforts. However when it comes to the screenplay, the problems really begin. This story is actually executed quite badly at script level, leaving plot holes, unexplained paradox, and, worst of all, some really torturous dialogue that badly deadens the overall effect of what is an excellent premise.

In the Q&A afterwards director, Dana Lustig, explained that one of the two screenwriters is a qualified psychotherapist and the film explores that journey one undertakes in therapy going back through the cycle of painful events in one's life to break the cycle of behaviour that stems from those moments and causes pain in the present. Quite a brilliant idea actually, and one that made clever sense with the Leonard Cohen based theme of the story, however I felt given such a nice merge of ideas, it would have been better to have seen more money spent on script development and getting that crucial language in the screenplay right than on the production of the film, which may in fact have even benefited from having a less upper middle class look about it.

I don't think I'd particularly want to watch this film again, primarily because of the bits that fell short, especially dialogue and parts of the acting. It was, despite it's shortcomings certainly not a waste of my afternoon though and has left me with plenty food for thought and the resonance of some wonderful tunes. I wish the film and it's team of dedicated people all the best with it.

And for Raindance, whether I like or dislike a film (or parts of a film) there is always something rather special about their programming choices. A Thousand Kisses Deep is no exception. 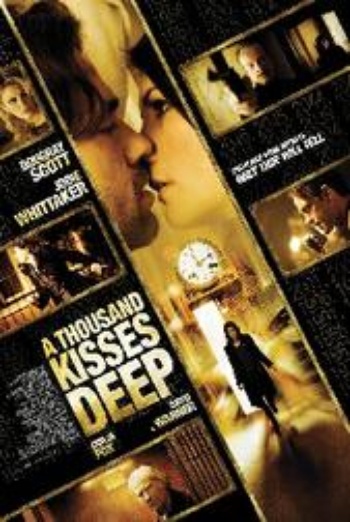